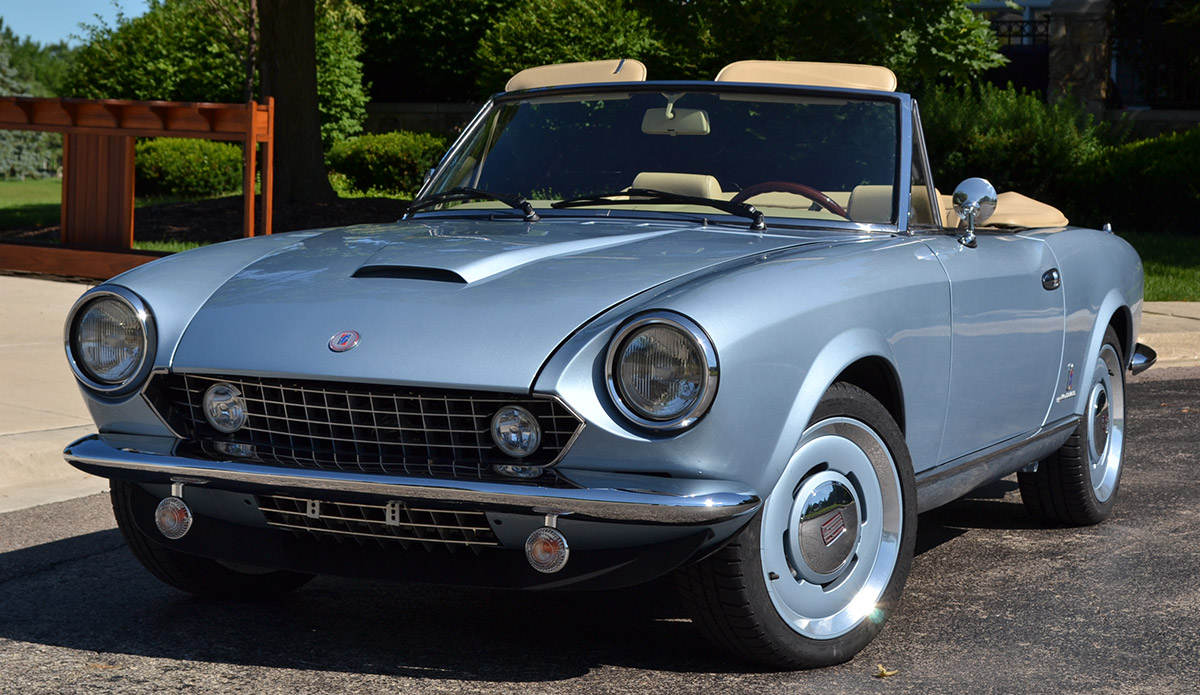 My Dad loved metaphors, slogans and “isms”. One of his favorites was “In life, things never stay the same. You are either getting better or getting worse.” This slogan became his business mantra, as he constantly urged us to improve. Dad wanted every car we build to be better than the one that came before it. To him, anything less meant staying the same—and that was synonymous with failure.

The new Tributo is based on the immensely popular Lusso S2

Roadster Salon is always moving forward, refining our vision. While the original Lusso was mostly a cosmetic exercise, the Series Two was a sincere effort to update the Spider and make it more in tune with today’s drivers and roads. Several years after my Dad passed away, I remember sitting down with our engineers in the conference room, and listing a stock spider’s shortcomings on a legal pad. “The car doesn’t stop. Its electrical system needs to be updated or it will never be reliable. It rattles like crazy. A Spider can’t keep up with traffic. And it steers like an old truck”. The criticism was harsh, but fair.

My Dad always resisted modifying the Spider, because he wanted our restorations to maintain their originality. He worried the car would lose its charm if the changes were poorly conceived or badly executed. His worries aside, I knew our Spiders need more than just better fit and finish. They had to drive better too. Trying to make upgrades using commonly available parts was not an option. It had been tried too many times unsuccessfully. We needed new ideas, designed and fabricated by our own staff. Once we got the engineers on board, the solutions came with comparative ease.

Proudly, the Lusso S2 has become our most valued effort. It is a rolling showcase for Roadster Salon’s exclusive technology, and made the Spider a safer, more contemporary driving experience. We’ve spent countless hours and thousands of miles behind the wheel of our Lusso development vehicles, detailing how they behaves under a variety of road conditions. When compared to a stock Spider, the current Lusso S2 is a dream concept. It is far beyond the fit, finish and performance capabilities of an original Fiat Spider. Yet, further improvements were still possible. The Tributo is our next step.

What is a Tributo, and how does it differ from a Lusso S2?

The idea for the Tributo came to us about a year ago, when a creative customer suggested doing a themed version of the Lusso S2. A true Italian car enthusiast, he correctly noted the DNA running through the veins of all Spiders originated from vintage Ferraris and Maseratis. Our customer wanted to “pay tribute” to those classic roadsters from the 60’s and 70’s. He wondered aloud if some of those design elements could be merged with the basic Lusso platform. We loved the premise. I saw it as an opportunity to take the Lusso to an even higher level of custom design and performance.

Once again, the yellow pad came out. But this time, not only to outline areas where performance could be improved. We took the lid off and re-imagined the entire car. We quickly realized that it’s much more difficult to improve something that’s already very good, versus something with obvious flaws. Roadster Salon’s team was up for the challenge and focused on refinement, detail and aesthetics.

To suit the taste of both luxury and performance-oriented customers, we decided to build two different versions of the Tributo. A Maserati themed version and one inspired by Ferrari. Each have their own unique personalities.

For the Maserati Tributo, our first area of attention was the interior. Our design team’s focus was to upgrade it cosmetically while also making it more functional and luxurious. The directive was to keep these improvements within the context of a Maserati inspired theme. The new Tributo incorporates an entirely new dash design. It features custom white-faced LED gauges with a GPS tracked odometer and speedo, plus a real Maserati jewel-like clock as a binnacle centerpiece. The entire package is trimmed with hand stitched Maserati sourced leather.
Next on the agenda was performance. Early in the process, we decided to include exclusive technology planned for a future Lusso S3 into the Tributo. The decision was aimed to bring newly developed engineering improvements to the market immediately, rather than waiting for a revision scheduled for next year. Consequently, the Tributo features our Generation II rack and pinion steering system, second generation structural chassis bracing, and a Maserati inspired multi-piston braking system. The Tributo’s suspension and drive line has also received some subtle tweaks beyond the current Lusso S2. An improved automatic transmission and power steering are available options.

The cherry on top is a choice between real Boranni wire wheels or custom scaled and adapted Maserati alloys. Each car is finished exclusively in a color from Maserati’s factory color chart with more extensive paint preparation and better finishing than a standard Lusso S2. For a limited time, the Tributo Maserati package will be priced at $15,995 (plus the cost of a base Lusso S2).

Our Ferrari inspired Tributo is similar in concept to the Maserati version. However, this second themed model has more emphasis on sport. It is designed for those seeking a slightly harder edged car, with even sharper reflexes. As expected, interior and exterior colors are from the factory Ferrari color palate. The Tributo Ferrari will also have a non-functional version of the custom hood found only on the Spider America. Gauge faces can be black or yellow in addition to white. A Ferrari inspired dash arrangement differing in detail from the Maserati version will be included. Stiffer suspension settings and a shorter throw five speed transmission is also standard.

Orders for both models are being taken now for Spring 2019 delivery on a first come basis. Learn More.